If you were to design a facility that your children had to work in, what would it look like?

This research is a response to the Material Handling & Logistics Summit of 2007, which identified several challenges for the Material Handling Industry in the coming years.  Chief among them was the need to find, attract, and retain good workers. This initiative intends to make distribution centers more attractive and productive places for our sons and daughters to work.  Following is an overview of the concept.

Creating a Worker-Centric Warehouse is about much more than solving a specific, well-defined problem.  We are taking a multi-disciplinary approach, with five major areas of concentration. 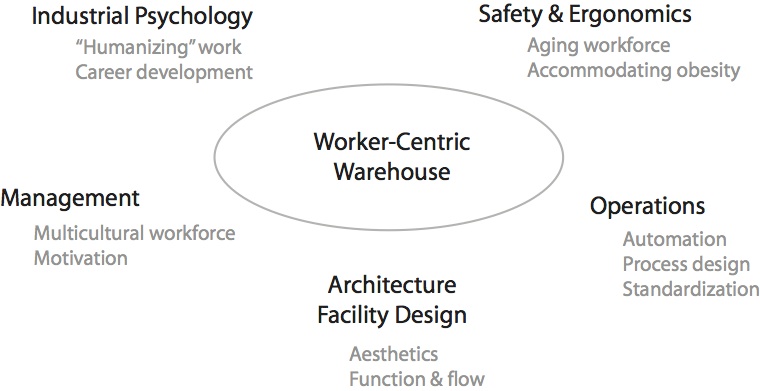 First is Industrial Psychology, which is fundamental.  Research in this area should include ways to “humanize” the work in a DC, making it more meaningful and satisfying for those who devote their working lives to it.  Other possible areas of research include leadership development, defining career paths for workers, the need to move beyond training to lifetime education, and the many issues associated with family support.

Second is Management.  The changing nature of the workforce for most DCs in our country has brought many new challenges, including how to manage in a multicultural and multilingual environment and how to motivate older and younger workers.

Third is Operations, which should include the role of automation and its impact on worker satisfaction, process design, standardization, and so on.  Ideally, research in operations will go beyond treating workers as “constant rate production machines” to dealing with issues of motivation, fatigue, boredom, and other realities of the human condition.

Fourth, Safety and Ergonomics.  It is widely believed that the workforce in many distribution centers is getting older.  How then to accommodate the special needs of older workers, so they become satisfied and productive workers?  Also necessary is research into the effects and challenges of obesity, which is an undeniable reality in our nation.

Fifth, the Worker-Centric Warehouse should be a nice place to work, physically, and so we must include Architecture and Facility Design as core subjects.  Topic areas should include aesthetics, optimal function and flow (for both material and information), and cultural accommodations associated with the new workforce.

I very much hope to connect this work with the exciting work on LEED-certified warehouses. Eventually, the research should produce a list of very general attributes which define a Worker-Centric Warehouse.  These Standards of Excellence could then be used for constant evaluation and assessment of participating distribution centers.  We could even imagine a certification program, similar in spirit to the LEED program, which would give participating DCs increasingly higher goals to meet.